Kevin Alonso, or the Cowboy, is one of 24 Survivors

Kevin can lasso other survivors toward him, and he can carry them to safety. He can also lasso the hunter and pull himself toward them.

Users of the cowboy mostly use him to rescue survivors and in all female teams. He can also stun the hunter with a pallet longer than most other survivors 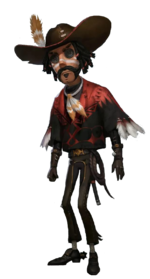 A cowboy from the North America who befriended a young girl from an native American tribe when he was younger and learned how to use the lasso. Many years later, he was saved by the native Americans when he suffered misfortune and the passionate Kevin Alonso remained with the tribe. But good things never last and the tribe died out. He didn't want to stay, so he decided to roam the European continent.