Gamepedia and Fandom have joined forces and our combined teams would like to encourage all Identity V fans to unite work together.
Please head to the community portal to discuss whether this wiki should merge with Fandom's Identity V community.

Joseph, or the Photographer is one of 16 Hunters

The Photographer is a time and space manipulating Hunter. Joseph grants the power of two space times and create a static camera world with his cameras placed all over the map.

His Recorded Moment ability allow him to enter and exit the Camera World freely and allow him to do surprise attacks when Survivors are decoding Cipher Machines or rescuing someone from Rocket Chairs. His second ability, Time Jump, allow him to records the path he passed in the last 15 seconds and he can return to any point in the path. 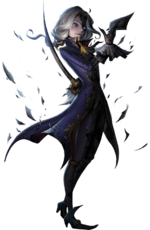 Coming from an affluent aristocratic family, Joseph, also known as Ex-Count Desaulniers, was born in France alongside his twin brother, Claude. During the early years of his life, it is implied his family was forced to flee France and move to England, likely because of the mass emigration to Britain during the French Revolution. Not too long after, his brother passed away from illness, and the pain of losing his dear twin and trusted companion caused Joseph to become emotionlessly absorbed with art and photography. He hoped that he would be able to save the appearances of the people and objects he took photos of to liven up his pictures. Despite being arrogant, biased and overly sentimental, the count was a wealthy and well-respected man, his French accent and elegance alluring to the many people who were willing to model for his hobby. However, suspicions and rumors about the now-elderly Joseph began to spread amongst the maids and workers of the Desaulniers Manor when the population of the hamlet began to drop rapidly. [1] Now seemingly slipping into a dark place, a panic-stricken mob forced their way into Joseph's residence, but the old gentleman was nowhere to be seen. On the wall of his studio, however, were all kinds of lifelike portraits of people that seemed to be looking right at them; it seemed that Joseph's shutter took more than photos, after all.

These are two Abilities that are unique to Joseph: