Michiko, or the Geisha, is one of 17 Hunters 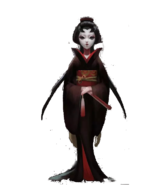 The Geisha met Miles, a foreign army officer at a banquet where they fell in love soon after. They got married and returned to Mile's homeland together. His father was particularly vocal in his opposition to their marriage. He was cynical of her and hoped to drive her out of the family home. Not long after, Michiko mysteriously disappeared after Miles left on a business trip. Miles' father claims that she ran off with another man and urged his son to find another wife. Miles, however, started to search for his wife, Michiko, but no one knows where she went.[1]

Geisha has three abilities that are unique to her.

Dear Mr. Donnelly: It has been six months since we last met, and I wonder how you have been doing?
I have secured and stored the item you placed under my care to avoid unwanted attention.
However, the expenditure to relocate the item has exceeded my savings. Therefore, I humbly ask you to offer additional funding to finance the storing fee.
On the other hand, I have overheard about an unsettling investigation on your son. Please reply to this letter at your earliest convenience to evade further conflict.


I wish you good health.